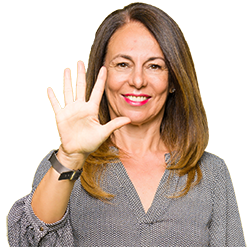 Today, there are 28 radio stations that serve the CSRA. Each provides a unique blend of music, information, and entertainment.  Some stations focus on politics or sports. Some play country music. Some play the hits. Some play classic rock. Some are on the AM dial. Some are on FM.

When Mr. Davenport and Mr. Jack began broadcasting, there were no TV stations in Georgia. Those would come 18 years later. Also, there was no social media, YouTube, Sirius/XM, Pandora, Spotify, or smartphones. Each of those would all be products of the next millenium.

With an overabundance of advertising options now available to small business owners, does advertising on Augusta radio still make sense?  Here are five facts that serve to answer that question.

1. Augusta Radio Reaches More Consumers Than All Other Media

Last week, 358,900 adults tuned-in to an Augusta radio station.  That equates to nearly 90% of all consumers.  No other local advertising medium has that type of reach.

Reach, according to Nielsen, is the single most potent media component of any advertising campaign. As it relates to creating sales increase, reach is more important than brand, recency, target, or context.

Regardless of what some local business owners may assume, radio's reach is dominant among all consumers, including Augusta's millennials. 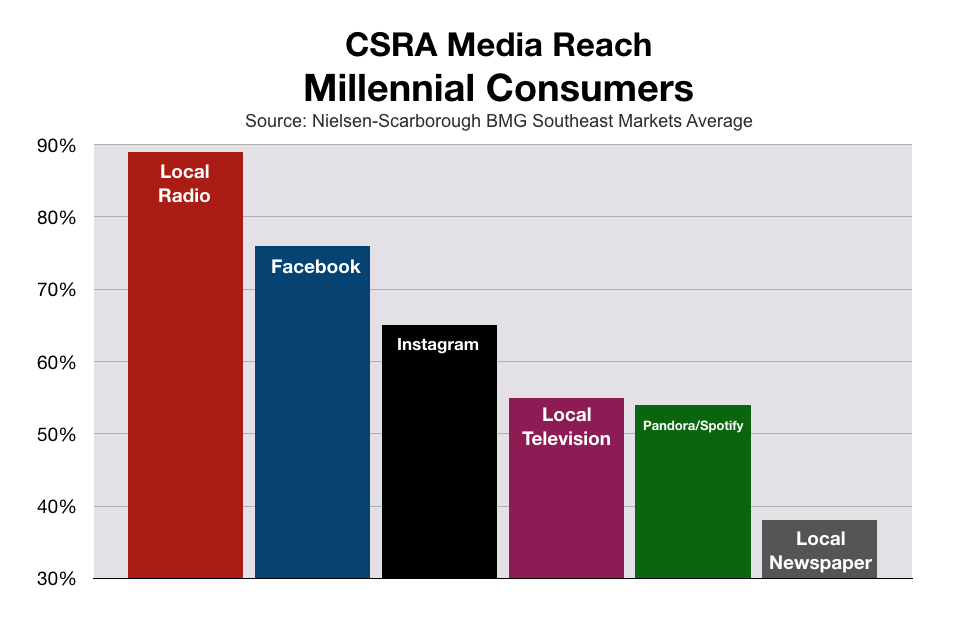 2. CSRA Consumers Mostly Use Radio Outside Of Their Homes

According to Nielsen, 62.7% of radio listening in the CSRA happens while consumers are at work or in their cars. 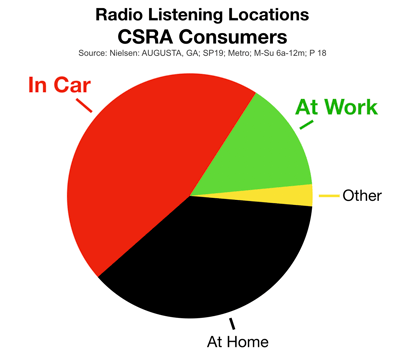 Each month, according to Nielsen, 321,952 Augusta consumers depend on a search engine results to inform purchase decisions. A study by Fleishman Hillard, a global marketing company, found that 89% of purchase decisions begin with research on sites like Google, Bing, or Yahoo.

A typical Google search, though, can return information about hundreds if not thousands of different companies, products, and services.

For instance, a Google search for plumbing companies in Augusta  returned more than 892,000 results. So, which result are consumers most likely to click-on?

According to a study by Red C, a research-based consultancy service, 82% of respondents selected search results that contained companies they were already familiar with.  This decision was made irrespective of where the result ranked on the page.

Advertising on Augusta radio can be critical to instilling the type of familiarity that creates valuable clicks.

Last week, for example, Augusta radio reached 89.9% of all local, adult consumers who performed a Google search. This was far greater than were reached by all other local advertising options. 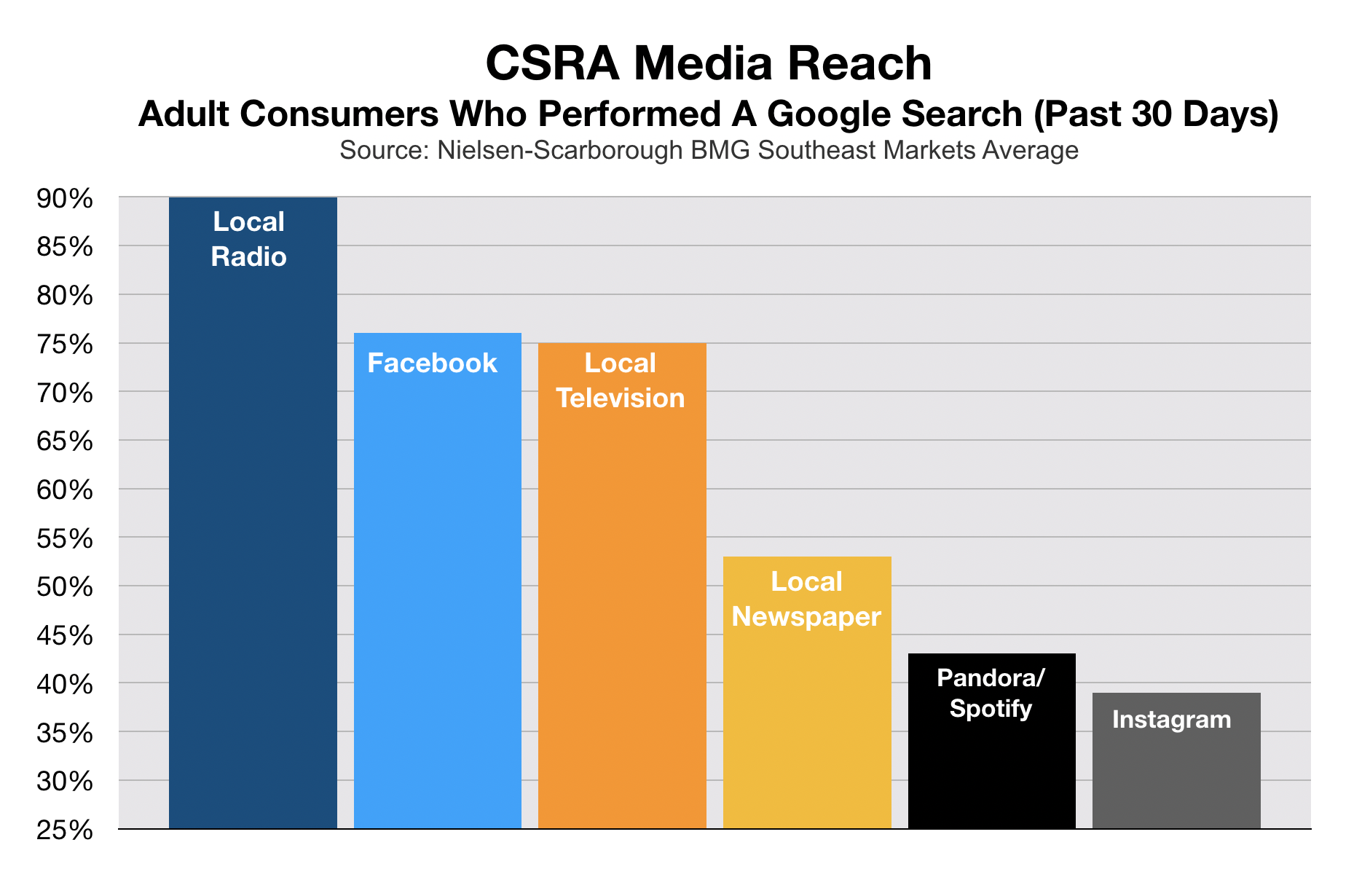 4. Advertising on Augusta Radio Reaches The Vast Majority of CSRA Consumers Who Use Other Media

Most CSRA small business owners are constrained by budget to which advertising options they can use for marketing their goods and service.

Although almost every medium can add value to a company's advertising mix, costs can limit the choice to just one or two.

Advertising on Augusta radio, though, has the unique ability to reach more than 90% of all consumers who utilize other media.

For example, in THE CSRA, local radio reaches 91% of all consumers who read a newspaper, and 90% of everyone who watches local TV. 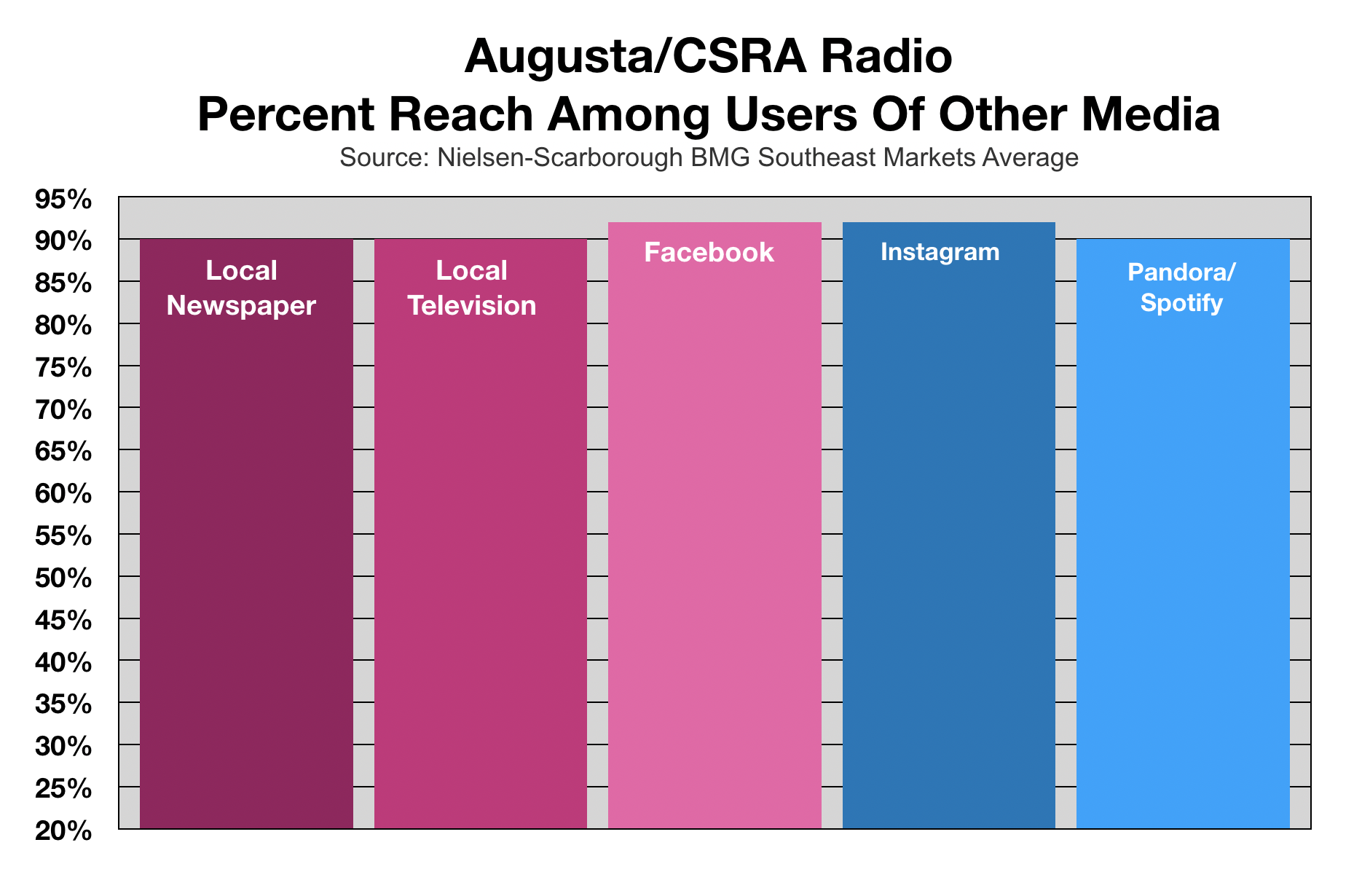 5. Augusta Radio Has The Largest Reach Among Black and Hispanic Consumers

Black and Hispanic consumers represent a sizable portion of the CSRA. According to US Census information, these two populations comprise 41% of the adult population and will contribute $2.3 billion in spending to the local economy.

To claim a share of this very lucrative market requires CSRA small business owners to advertise. By any metric, local radio is the best way to reach Black and Hispanic consumers.

For instance, last week, 90% of Black and Hispanic consumers tuned-in to an Augusta radio station. This is considerably more than watched local TV, read a newspaper, used social media, or logged-in to a streaming audio site. 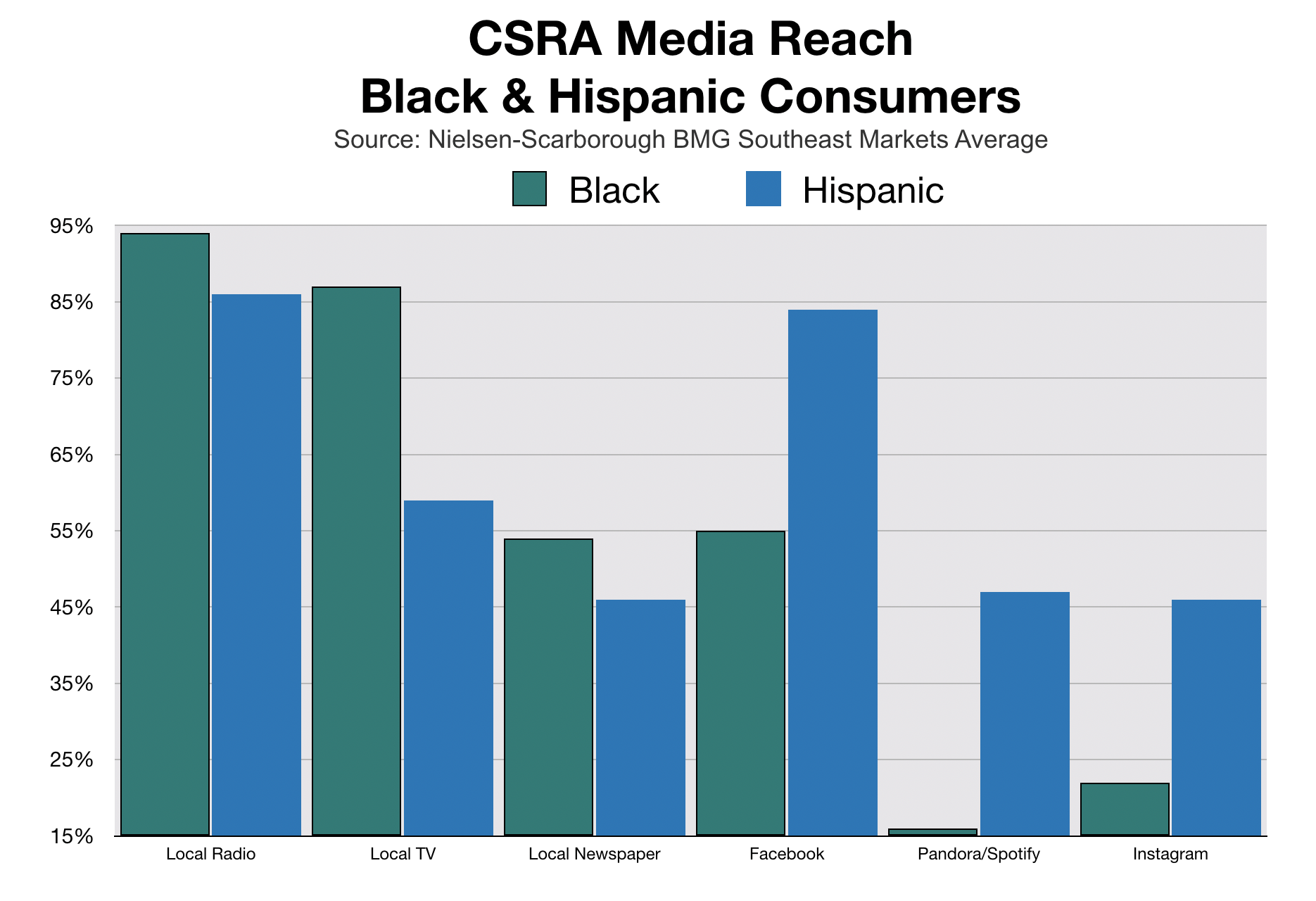